A History of the Development of the Atlas Break Card Game

Atlas Break is currently being printed in a factory as I write this. That is just mind-blowing to me and so exciting. A physical card game like the ones on my shelves, like the ones at the boardgame shops and cafes I love. So much work has gone into this game and the product itself is really just the beginning. But, before diving into the future of Atlas Break, I want to take a look at the past and deliver a brief history of the game’s incarnations.

When I first began designing Atlas Break, it was absolutely nothing like its current incarnation. My initial task for this project was to create a two player digital card game.

I delivered a few ideas of different play styles, little family trees of mechanics and we chose one to go with. My ideas manifested everywhere. I was constantly brainstorming and daydreaming. Two activities which I believe are essential for any task, particular creative endeavors.

Notebooks were full of sketches, lists of questions, ideas, names and on my computer copious spreadsheets and organization tools. 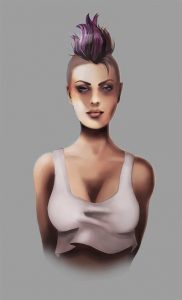 One of my original concept drawings for Rizza Vice 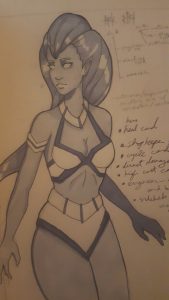 A character sketch aside my earliest game notes

As I became more and more engaged in the design of the game, one mechanic seemed to lead to another. Ideas flowed and with a digital platform, mechanics could be employed which assumed automatic calculations and visual alterations accomplished instantly, easily, and reliably. One mechanic which took full advantage of that capability in the original was the leveling up of creatures. Players used decks they created pre-game full of fairly weak critters and beasts which, after surviving on the playing field for X number of turns, would automatically level up into more formidable monsters with different stats.

That was just one of the many mechanics which required a computer. As the game was being programmed, how were we going to test and play the game?

Let me tell you about my dear friends…paper and dry erase boards. Steve made a card database for me to enter every card into. From there, we printed our first prototypes on card stock. They were just spreadsheets, really, with the vital information and stats written out. Playing the game on top of a white erase board, we tracked all the stat changes, card level ups, and anything else we couldn’t remember and played the game again and again.

The game was fun to us. Who knows if it was fun in itself or if it was just the excitement of the process, the tracking of numbers, the discovery of problems and their solutions. The instant gratification of, “This isn’t working so…BEGONE mechanic!” or  “This is my game, I’m CHANGING THIS!”

I played the game with more people. Friends would come to sit on the opposite side of my whiteboard and we would play. There was no way to tell how long an average game would be because so much was involved in tracking all the stat changes and levels. It was still fun.

We hired artists to help us create the beautiful imagery in the game. My wild lists of animals and robots with names like “Veta Clamps” and “Fex Rogo” and…”Harold” were becoming real. Tom created the card frames and the play field and they became more real. And I, with an endless tapestry of mechanics endlessly sought to repair any holes in the weave.

It took a long time to fill our card library with all of the necessary art assets and it was taking even longer to program the digital prototype. Progress was steady but our resources were limited and the knowledge that once the prototype was made from scratch, my entire spiderweb of mechanics programmed, it would have to be repeatedly broken in testing and remade as we alter and tweak for balance…it was a heavy feeling. We had been working on this passion project for almost two years, all the while everyone holding down other jobs and projects, and if continued on this path, the game wouldn’t be complete for many years to come. We had to make a change…a big change.

The Change from Digital to Physical

That change was completely transitioning the game from a digital product to a physical one. All of my mechanics, my teetering balances, my previous work…much of it simply no longer applied. There was something very exciting about starting fresh but with new constraints. You know how the rules are what make a game fun? Well, if game design was my game, I suddenly had a lot of new rules. I had to retain use of as many, if not all, of the previously commissioned art assets and create a new game without the benefit of any of the automatic calculations a computer could do for the players.

When we made this change, I knew I wanted to make a Deckbuilding card game. It’s a genre that I love dearly and I am so grateful for other developers who have made games like Ascension, Dominion, Star Realms, and all the card games that inspire me and that I’ve just had so much fun playing with my friends over the years.

We Change the Game and the Game Changes

Development, like any creative endeavor, is very much an extended conversation. If you’ve ever had the pleasure of studying drawing or painting, you might be familiar with the sense of creating something beautiful then setting is aside only to wake the next day with fresh eyes to look upon your creation again and think, “Oh wow, that’s awful.” It becomes very much a discussion between creator and creation, each informing the other of what is needed. And ideally, if we are so lucky to know such individuals, we can add more experienced and knowledgeable participants to add their valuable piece to the conversation.

I began developing with the general mechanics common in Deckbuilding games and with a million other ideas both new and from the original digital version. Six factions, unique Champion powers, Districts which impacted both players, and Bounties that came up in the Market randomly.

Factions retained their general feel. Nature would be Influence (health) oriented, the Machine and its bots would be violent and damage-based, and so forth–each faction with its own flair and tendency towards a specific strategy.

After developing the new mechanics, I entered them into our database and printed out a new series of black and white artless cards printed on flimsy card stock. And the team began playing it. It was complex and heavy, feeling rather bogged down instead of elevated by layer upon layer of rules. There were drastic changes made at a moment’s notice, the team was wonderfully flexible and took every major change in stride.

And then, I had the great fortune of having a meeting with a game designer with worlds of experience beyond my own. I cannot express how valuable the perspective of an outsider can be. Not just the important contribution of playtesters but of other industry professionals. I had become so inextricably tangled in my game, studying the details so closely, that it’s not only that I couldn’t see the forest for the trees, but that I was counting pine needles. This conversation pulled me out of those depths and changed the game in ways that so greatly improved it and I am so grateful for.

I could see. The game was too complex, the decisions too vast, the factions too many. I was still thinking in a way derived from the simplification that a computer brings. The likelihood of a player’s faction appearing weren’t great enough to inspire the, “A-ha, yes!” opportunities but weak enough that the opponent could steal all valued enemy factions, leaving some the brightest, stand-out mechanics inert.

With simplified factions, Bounties took center stage as our problem child. Our playtesters found that with fewer cards, these guys often clogged up the Market and stalled the game. We decided to move them to their own pile, creating a constant opportunity for bonuses and a little bit of cultural flavor to the post-apocalyptic environment.

After much playtesting and near constant alterations, it was time to put it all together. The artists had delivered their works, our creative director had put together our icons, rulesheet art, and stunning frames (which I really think the detail of which is a standout for our game), the mechanics were housed in a wonderful database, and I was ready to put the pieces together.

I named every card. Placed each piece of art in its frame. Entered the icons and mechanics. And when possible, I added an italicized line of flavor text. Diana and Gunnar ran the gambit in QA for all of our content and pieces were altered, redone and done again until we were able to send our game, Atlas Break, to the printer, at long last.

In some small ways, I mourned the death of the previous incarnations as the game changed so much and simplified. What could those previous incarnations had become? But, honestly, they needed to change and they changed for the better. The game became more eloquent and that was a sort of victory in itself. It also paved the way for opportunity. There is so much more I want to share for Atlas Break and, if players are interested, I have many ideas waiting in the wings and hope players share their ideas as well!

Playing and changing and seeing the game evolve, it’s apparent that rules are malleable. How changing one aspect, one mechanic, one value, can alter the mood, pace, and balance. Have you ever played a game “wrong” and after a few games realized the mistake? I remember playing Pandemic with a friend incorrectly only to find the “real” way to play suddenly too easy after enduring a punishing misunderstanding. And I think we liked the “wrong way” better!

If you play our game, I do hope you enjoy it! And feel free to play it differently. Change the rules, alter mechanics, play with game design! And if you do, please tell us about it. And most of all, have fun.